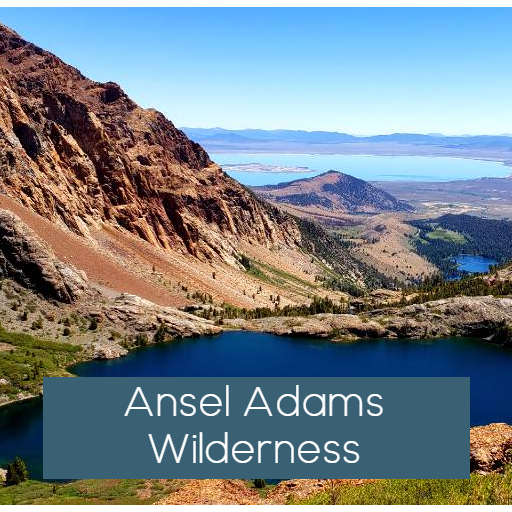 The Ansel Adams Wilderness is dotted with sparkling lakes, glacially sculpted gorges, and imposing peaks. Originally protected as wilderness by the 1964 Wilderness Act, it was first called the Minarets Wilderness. Renamed to honor Ansel Adams in 1984, it spreads over 230,258 acres, ranging in altitude from about 3,000 feet to 14,000 feet.

For thousands of years this area has been inhabited by people of the Miwok, Monache, Mono, Washo, and Shoshone tribes. Acorns, pinon pine nuts, and obsidian were gathered and traded along routes that crisscrossed this wilderness.

The deep trough of the North Fork of the San Joaquin River cuts through the center of the forest beyond the Ritter Range and further west below the Merced-San Joaquin Divide. There are more beautiful lakes in this region than anyone can fish in a season.

The country south of the Middle Fork is a great vast forested Wilderness with some lakes, many lovely meadows inhabited by numerous types of animals and birds. Here there are no dramatic crests to scale. The duff trails pass alternately from dense forest to flowered meadows in an elevation averaging from 6500’ to 8000’.

Permits are required year round for all overnight trips in the Ansel Adams Wilderness. Why?

A quota is in effect for all entry points into Ansel Adams Wilderness that applies to all overnight visitors from May 1 through November 1. Some trails have a separate quota for commercial use. Visitors using a commercial outfitter or guide must obtain their permit through the commercial operator.

Permits for backpacking in the Ansel Adams are available from the Sierra and Inyo National Forests, depending on where you plan to enter the Wilderness.

The California Wilderness Act nearly doubled the acreage of the former Minarets Wilderness and changed the name to Ansel Adams. The Wilderness is located in both the Sierra and Inyo National Forests and covers approximately 228,500 acres (138,660 acres are in Sierra National Forest). Ansel Adams is characterized by spectacular alpine scenery with barren granite peaks, steep-walled gorges and rock outcroppings. Elevations range from 3,500 feet to 13,157 feet and there are several small glaciers on the north and northeast facing slopes of the highest peaks. There are also a number of fairly large lakes on the eastern slope of the precipitous Ritter Range. The Ansel Adams Wilderness contains the headwaters of the North and Middle Forks of the San Joaquin River.

Camping is prohibited in the following areas of the Ansel Adams Wilderness:

The Ansel Adams Wilderness is very heavily used. Approximately 30 million people live within a few hours’ drive. Access routes to Yosemite National Park, as well as the iconic John Muir and Pacific Crest Trails, pass through it. High levels of use and the flux of visitors across jurisdictional boundaries require that visitors to adhere to high standards of conduct. Before visiting, familiarize yourselves with jurisdictional boundaries, regulations and appropriate Leave No Trace practices.