A Guide To The The Sierra Nevada Segment Of The PCT

The Pacific Crest Trail is a unique educational and recreational treasure and one of the finest trails anywhere in the world. The PCT reveals the West’s unique blend of environs and beauty.

Untold thousands are deeply devoted to the trail. For many the PCT has become a way of life. Their stories are compelling and little known. 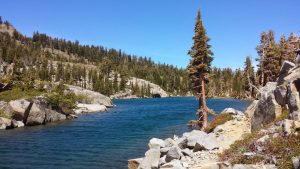 The trail spans 2,650 miles from Mexico to Canada through three western states: California, Oregon and Washington.

The Sierra Nevada Region or as the PCT calls in the Central California region of the trail is a spectacular section that is often sought out from visitors all over the world. Starting from this section’s lowest point at Walker Pass (elev. 5,246′), the trail enters a roadless and scenic area, hugging the relatively dry crest through the Chimney Peak Wilderness before reaching the South Fork of the Kern River near Kennedy Meadows. The route alternates between expansive meadows and conifer forests, and then embarks on a 3,300-foot ascent to Cottonwood Pass. To the north is the majestic, glaciated High Sierra. The glaciers formed shallow basins that filled with water to create thousands of lakes and tarns. In Sequoia National Park, the popular John Muir Trail descends from nearby Mount Whitney (elev. 14,494′) to join the PCT. The two trails merge and share the same path for most of the way to Highway 120 in Yosemite National Park’s lush Tuolumne Meadows (elev. 8,690′). Along this stretch, the route repeatedly descends deep canyons only to ascend to high saddles. The PCT crosses eight named passes above 11,000 feet in this section, the first being Forester Pass (elev. 13,153′), the highest point on the entire trail.

After crossing Highway 108 at Sonora Pass (elev. 9,620′), the trail begins a generally subalpine, relatively level traverse that stays close to the Sierra crest until this section ends at Interstate 80 (elev. 7,200′). Volcanic rock formations can be found north of Yosemite, with increasing frequency from Sonora Pass to Echo Summit at Highway 50, and again near this section’s end, north of the Granite Chief Wilderness.

Form here the region is commonly referred to as the Northern California segment of the trail. North of Donner Summit (elev. 7,989′), old volcanic flows and sediments bury most of the ancient bedrock of the Sierra Nevada crest. Beyond the North Fork of the Feather River, the Sierra Nevada yields to the southern Cascade Range. Rich in nutrients, the volcanic soils here are at the optimal elevation to receive sufficient rainfall to produce lush forests. Other plants include lupine, paintbrush, larkspur, columbine, gooseberry and manzanita. Animals include raccoon, marten, mink, badger, fox, bobcat and the ever-present deer and black bear. In the fall, skies are often filled with migrating birds on their journey south along the Pacific Flyway. The PCT traverses Lassen Volcanic National Park and crosses Highway 89 midway through the southern Cascade Range. Nearby is Mount Lassen at elevation 10,457 feet.

For much of the Sierra Nevada a PCT hiking permit is required to hike, backpack and recreate on the PCT. Learn about local permit requirements here.

Some permits are under quotas that protect an area from overuse and spread people out throughout the season. Other permits are self-issue at the trailhead. Generally, you will need to get a different permit for each area you visit, and a new permit every time you leave the wilderness and come back.

Always check the local agency’s website for their specific requirements. You should also know about recreation.gov – the portal for reserving space on much of our nation’s public lands.

What You Need To Know If Planning a PCT long Distance Hike 2023. If you're hoping to apply for a...

Half Dome Cables Go up Thursday May 19th