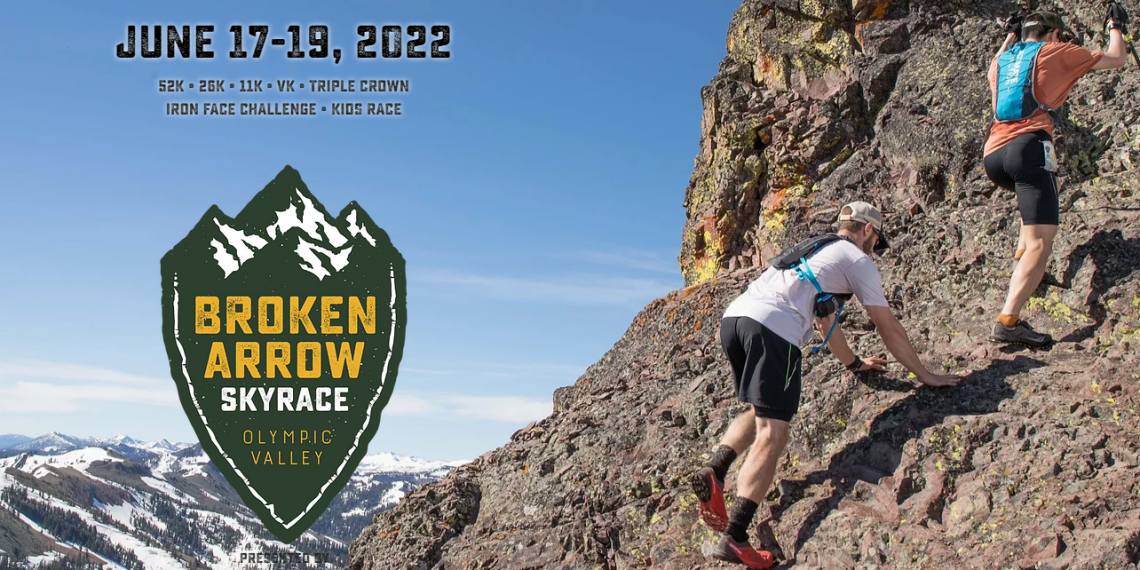 Olympic Valley Ca., June 16, 2022 – Over 2300 racers are converging into Olympic Valley this week for an epic challenge of skill and endurance, that will feature section of the Tahoe Via Ferretta course for the first time in competition. in 2022, the broken arrow skyrace will feature the Iron face challenge. A unique and unforgettable mountain running event, the Iron Face Challenge travels 5.75-miles and climbs approximately 2,000 vertical feet. From the valley floor, it traverses and climbs the most extreme terrain at Palisades Tahoe and is the first event of its kind in North America!

The Iron Face Challenge blends three distinct and challenging types of mountain adventure running: uphill, downhill, and scrambling on a Via Ferrata. The first is a 1.75 mile/830-foot uphill single-track section that starts next to the KT Sundeck. The second section of the race, the Tahoe Via, is a protected climbing route with permanent steel anchors and cables that keep runners safely connected to the rock at all times. This “via ferrata” section ascends the Tram Face, an imposing and pronounced granite cliff that towers above Olympic Valley. The Tahoe Via section is .35-miles long and has just over 600 feet of climbing.

​As runners ascend the second section of the Iron Face Challenge (the Skyline Traverse), they will encounter chimneys, exposed ledges, and the highlight, a 30-foot long suspension bridge that is only passable via a single foot cable! After topping out on the Tahoe Via, participants will then enjoy a smoking 3.7-mile downhill to ring the iconic Broken Arrow Skyrace bell at the finish line.

This is a true adventure race that combines running and pseudo-rock climbing. Accordingly, the Iron Face Challenge will test the mountain mettle of any runner.

​The mood at Palisades Tahoe is absolutely electric as we prepare to welcome you to our beautiful Lake Tahoe playground! ~ Broken Arrow Skyrace organizers

Festivities for the weekend kick off Friday at 8am in Olympic valley and will feature seven unique races, with the kids event being a crowd favorite.

A fan favorite welcomes future Skyrunners to a fun and festive kid’s event at Palisades Tahoe. The course will be easy and fun, and children of all ages are welcome to participate, although we ask little ones under six years old have a parent accompanying them. The race will begin at the start line of the Vertical Kilometer, ascend a short hill, and circle back down on easy service roads through the finish line chute.

The VK covers some of Olympic Valley’s most iconic terrain in a short, steep, and physically demanding sprint. From the valley floor, runners will ascend over 3,135 feet in a mere 4.25 miles to the summit of near 8,885-foot Squaw Peak.

The course begins as a dispersed mass start, ascends steep and technical off-trail talus, and finishes on an exposed ridge. The ridge to 8,885-foot Squaw Peak includes a bolted handline and the infamous Stairway to Heaven ladder.

The Broken Arrow is all about community, both elites and recreational runners, and as such we want to celebrate runners of all types! Accordingly, In 2018 we added our 11K! While our other distances are Skyrace caliber events the 11K is a gateway drug to those longer and harder distances. If, perhaps you are just getting into trail running or are intimidated by the other events, this is your race!

The Broken Arrow 26K covers a world-class loop that showcases some of Olympic Valley’s most famous terrain. From the valley floor at 6200 feet, runners will ascend nearly 5,000 feet as they circumnavigate the heralded terrain of North America’s most rugged and extreme ski resort. The course is characterized by a plethora of vertical gain over a technical and physically demanding landscape that is mostly above treeline.

The Broken Arrow 52K covers a world-class loop (twice!) that showcases some of Olympic Valley’s most famous terrain. From the valley floor at 6,200 feet, runners will ascend nearly 5,300 feet as they circumnavigate the heralded terrain of North America’s most rugged and extreme ski resort. The course is characterized by a plethora of vertical gain over a technical and physically demanding landscape that is mostly above treeline.