No Result
View All Result
Home Fishing and Hunting

by sierrarecmagazine
in Fishing and Hunting, Lake Tahoe, News and Events
19 1
0 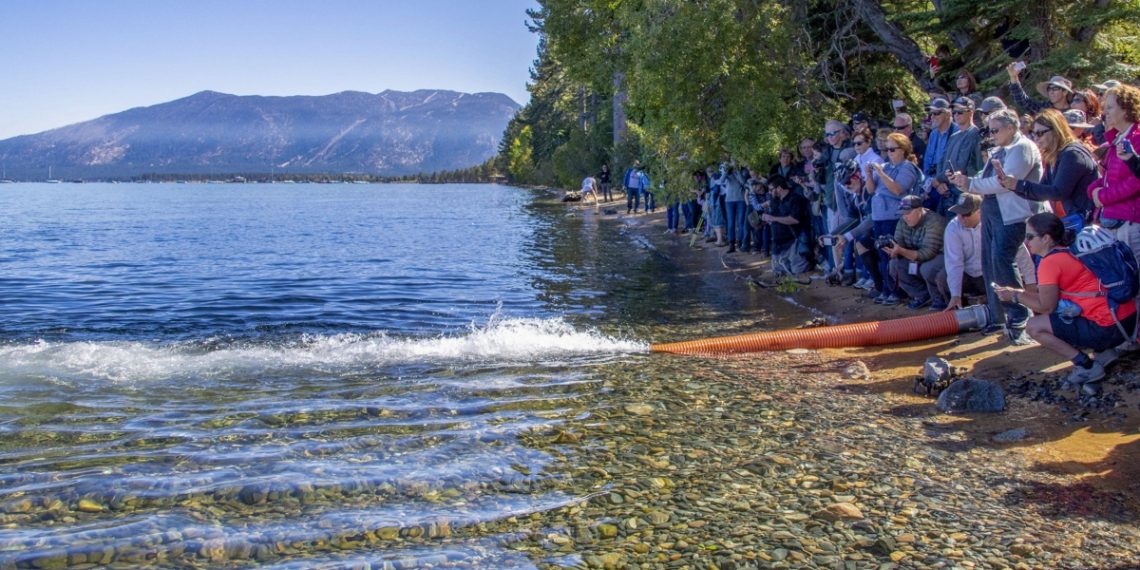 Tahoe’s native fish are making a return this summer.

The reintroduction of Lahontan cutthroat trout has biological and recreational importance as well as significant cultural value to the Washoe Tribe. As the original stewards of Lahontan cutthroat trout, the Washoe Tribe has been an important stakeholder and partner since the beginning of reintroduction in the Tahoe Basin. The tribe has always been supportive of the restoration projects within Washoe ancestral lands.

The fish will be stocked at various, publicly accessible locations in both the California and Nevada portions of the lake. Approximately 20  percent of the trout will be tagged to help biologists evaluate the success of the stocking effort along with the growth, survival, and distribution of the fish.

Anglers are required to follow all fishing regulations (see Sport Fishing Regulations below) and encouraged to report any tagged fish they catch by calling the phone number on the tag (775) 861-6355. Over time, stocking will inform conservation and recreation strategies in the reintroduction of this native strain of the fish into its historic habitat.

Lahontan cutthroat trout have been stocked intermittently in Lake Tahoe since 2011, although in smaller numbers. They are the only trout native to the Tahoe Basin and the largest cutthroat trout species in the world. The fish being stocked are the Pilot Peak strain of the species, which is known for its fast growth rate and achieving exceptional size. The Pilot Peak strain is also found in Nevada’s Pyramid Lake, which attracts anglers from around the world hoping to catch one of the lake’s giant Lahontan cutthroat trout.

Lahontan cutthroat trout are listed as a threatened species under the federal Endangered Species Act. Their original listing in 1970 predates the modern act itself, which was passed in 1973. The native trout eventually disappeared from Lake Tahoe due to overfishing, damage to spawning tributaries caused by pollution, logging, water diversions, and the introduction of nonnative species. Federal and state efforts are underway throughout the fish’s native range in California and Nevada to restore the species and its habitat.

While this summer’s stocking may inform future restoration efforts, it is an initiative to expand recreational trout fishing opportunities for the public, enhance the near-shore fishery, and to foster an appreciation for this iconic native species.

Anyone 16 years or older fishing anywhere in Lake Tahoe must possess either a valid California sport fishing license or a valid Nevada fishing license. Either state’s license is valid around the entire shore of Lake Tahoe. Anglers fishing the California portion of Lake Tahoe may fish year-round and are allowed a limit of five trout per day and a 10 trout possession limit (California Freshwater Sport Fishing Regulations, section 5.85).

About the U.S. Fish and Wildlife Service

The U.S. Fish and Wildlife Service works with others to conserve, protect, and enhance fish, wildlife, plants, and their habitats for the continuing benefit of the American people. For more information about our work and the people who make it happen, visit https://www.fws.gov/cno/ or connect with us via Facebook, Twitter, YouTube, and Flickr.

About the Nevada Department of Wildlife

The Nevada Department of Wildlife (NDOW) protects, restores, and manages Nevada fish and wildlife, and promotes fishing, hunting, and boating safety. NDOW’s wildlife and habitat conservation efforts are primarily funded by sportsmen’s license and conservation fees and a federal surcharge on hunting and fishing gear. Support wildlife and habitat conservation in Nevada by purchasing a hunting, fishing, or combination license. Find us on Facebook, Twitter, Instagram or visit us at ndow.org.

About the USDA Forest Service

The mission of the U.S. Forest Service is to sustain the health, diversity, and productivity of the nation’s forests and grasslands to meet the needs of present and future generations.

About the Tahoe Regional Planning Agency

Established in 1969, the Tahoe Regional Planning Agency was the nation’s first bi-state regional environmental planning agency. Our mission is to lead the cooperative effort to preserve, restore, and enhance the unique natural and human environment of the Lake Tahoe Region, while improving local communities, and people’s interactions with our irreplaceable environment. Find us on Facebook, Twitter, Instagram, or visit us at trpa.gov.

About the Washoe Tribe

Preserving, reviving and living the Washoe culture and traditions. Where: Respect for one another and tribal values promote our spiritual, physical and environmental wellness. Educational opportunities are available for all tribal members and descendants. A solid economic foundation ensures self-sufficiency for tribal success. Responsive government promotes teamwork, professionalism and accountability. On safe and secure tribal lands.

How To Travel And Tour The World With Your Electric Bike?