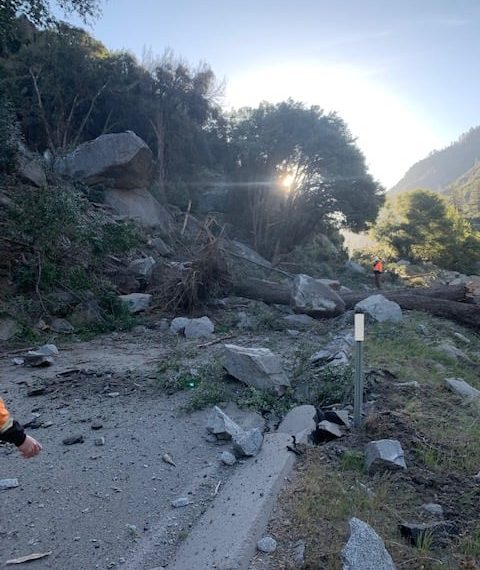 Kings Canyon National Park – April 21, 2022 – Cal trans and the Sequoia Parks Conservancy to day announced that the opening of the Cedar Grove area in Kings Canyon National park will not be opening on Friday, April 22 as scheduled, due to a significant rockslide on a portion of HWY 180 near Boyden Cavern (east of the cave at milepost 131) in Sequoia National Forest.

Cal Trans has reported substantial damage resulting from the slide, and with predicted weather coming in to the region today could make working in the area difficult. Cal Trans continues to evaluate the area and situation and more information will be made available as it is known.

The rockslide left a 600-foot debris field, 15 trees, and boulders weighing up to 200 tons. Caltrans crews have already begun working to clear the roadway and conduct all repairs to State Route 180.

Travelers with campground reservations at Sentinel Campground in cedar Grove are being notified through Recreation.gov only if their reservations need to be canceled at this time.