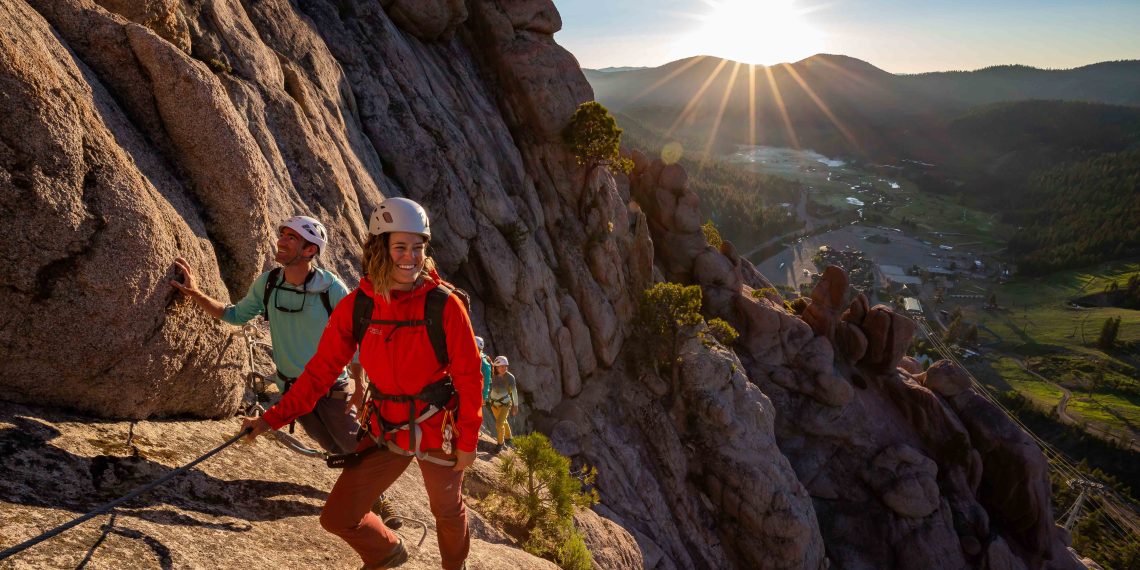 Challenge yourself with a guided climbing excursion on the rugged cliffs of California’s Sierra Nevada. Via Ferrata may be fairly new to California, but its origins are actually quite old! Via Ferrata, Italian for “iron way,” originated during the first and second World Wars. In order to aid troops in crossing the high peaks and passes of the Alps, the rock was retrofitted with steel ladder rungs and cables. The steel “aids” made the challenging terrain accessible to soldiers with no prior climbing experience. After the wars, nobody bothered to remove the leftover hardware from the rock and eventually recreationists began climbing the old routes for fun. Just like that, a new sport was born!

A modern-day via ferrata route leverages steel cabling and rungs (typically made of anodized steel rebar) drilled into the rock wall that allow one to climb vertical and sometimes overhanging terrain in sneakers and a smile. In most cases, climbers clip into a quarter-inch to half-inch steel cable at the waist or chest, with feet and/or hands using steel rungs to move just as one would navigate a ladder.

Long story short, moving through a via ferrata route feels like something between hiking and rock climbing, and it’s an increasingly popular adventure offering for mountain towns and summer mountain resorts all over the American West.

In California Recreational climbers have explored routes in the granite from centuries. Places like Yosemite National Park and the High Sierra backcountry are filled with routes and climbing technicians that thrive on the initial scramble up a face. But there is a certain level of skill and ability that must be obtained for the average traveler to experience these types of recreational ventures. With Via Ferretta these challenges for the most part are eliminated.

The Tahoe Via Ferrata is appropriate for all skill levels from first-time climbers to experienced alpinists. We welcome families, groups, and individuals. Although the experience doesn’t require specialized mountaineering skills, it’s important to have general physical fitness before joining us for a climb. You should be able to hike continuously for one or more hours, depending on the length of your climbing session.

Mammoth Ca Via Ferrata – 6 Routes to challenge all levels

Challenge yourself with a guided climbing adventure on the rugged cliffs of Mammoth Mountain. Via Ferrata, which means “iron path,” is a network of climbing routes using steel cables, iron rungs and suspended bridges fixed to the rock that climbers are attached to for safety. With six different routes that progress in difficulty, Via Ferrata is the perfect alpine activity for families and individuals.

There are 3 easy, 2 moderate – joined by a suspension bridge – and 1 difficult route. Following your orientation, your guide will determine the best route(s) for you. The routes ascend 180 ft and span over 300 ft across the cliff band.

There are inherent risks to any type of climbing. However Via Ferretta Courses have been designed to help beginners overcome some of the challenges of first learning to rock climb while keeping safety at the forefront of the operations. The equipment used is very safe for the participants. The biggest dangers individuals face are potential rock falls while climbing. Local Sierra mountain companies work diligently to remove potential problems on the course for a safe family experience.

What should I wear?

Shoes – Plan to wear sturdy closed-toe and lace-up shoes, such as a hiking or approach shoe. Running shoes are acceptable, but be sure that the sole is fairly stiff with good tread so you are comfortable climbing on metal ladder rungs and scrambling on rocks.

Gloves – Gloves are often recommended at facilities and sold if needed. Int he sierra Cables can get a little warm sitting on the granite all day.

Tops – Long sleeve breathable materials are great for climbing. A lightweight long-sleeve layer offers great protection from the powerful sun. Additionally, check the wind forecast for the day and consider bringing a layer to protect against wind.

Bottoms – We recommend wearing something comfortable such as outdoor pants or shorts. Running shorts or leggings are also great options. Remember, you’ll be wearing a climbing harness the whole time, so medium or long length shorts are typically more comfortable than short shorts.

Small Backpack for water – Always a good idea to bring a way to carry water. a small backpack is perfect for water and or a quick snack.