The Dope on Longboard Races in Plumas County 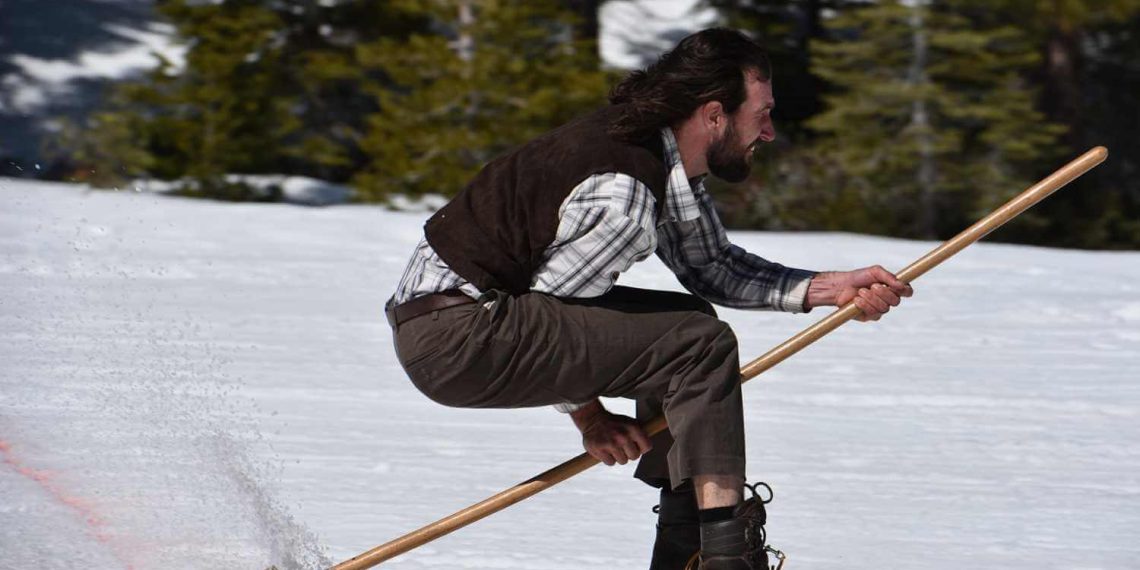 Plumas County 1-10-23 . . . Some believe that life is to be lived and frivolity is at the top of the
list. This frivolity can be seen every third Sunday from January through March at the Longboard
Ski Races at Johnsville Ski Bowl hosted by the Plumas Ski Club. “These races are one of the
highest levels of enjoyment one can partake in while keeping a 150-year tradition alive,” says
John Sheehan, chief-talker, aka Longboard Race announcer.

Racing 88 miles per hour down a hill on two pieces of wood called “Norway Skates” was first
introduced to the mining camps in 1853. “These skates were ideal for getting around in the
winter season. All ages traveled from five to as much as 15 miles on skis.” Though this helped
transport people, the winter months in this remote area could get tedious so when boredom set
in so did ideas on how to relieve the doldrums.

Downhill skiing has been around for 1,000’s of years from China to Norway, but it was in 1861
the first organized ski races with prizes were held in the mining area of Plumas at Onion Valley
between Quincy and La Porte. To get to the top of the mountain, racers hitched a ride in ore
buckets. Though not glamorous, it worked and locals claim it was the first ski lift. For the next 20
years, races were held between various mining camps with meets of 50 or more participants,
500 spectators and purses of $500 to $1000. So popular, there were skiers who did the “circuit”
at such descriptive locals as La Porte, Johnsville, Jamison City, Poker Flats, Sierra City, Monte
Cristo and such.
The skis worn by these early speed demons were made of vertical-grained Douglas Fir with a
groove on the bottom and shaped with bent tips created through a long steaming process.
Travelling skis were eight to 10 feet while racing skis were a minimum of 10 feet with some as
long at 15 feet. On both, bindings were two pieces of leather attached to the sides with three to

four holes on each side to lace. A small block of wood was attached to the ski to keep the heel
in place. Skiers started and stopped using a single six-foot pole with a block of wood on the end.
Starting was done by three to four lunging thrusts. Stopping was a bit more spectacular with
skiers sitting on the pole applying pressure creating a drag and an impressive “rooster tail” of
snow.

The secret to winning was not just a skier’s ability and the equipment but the all-important
“dope” applied to the base of the skis. The recipes for dope were closely guarded as they are
today with some recipes handed down over many generations and still a “secret.” Some
materials used to make a batch include spermaceti, a waxy substance from the brow of a sperm
whale, oil of cedar, Venice turpentine, oil of tar, wintergreen, soapstone, balsam of fir and pine
pitch. Even one batch maker used melted Edison cylindrical records. The speeds the dope
produced led to slogans such as “Sierra Lightning” and “Dope is King.” Finding these
ingredients today may be a challenge but be warned, no modern floral carbons are allowed and
this rule is strictly enforced.

Longboard races ran until 1917. In the early 1930s there was a small revival of the sport and
another one in the 1950s. Today, “vintage” downhill races continue with three longboard races
held annually at the Plumas Eureka Ski Bowl in Johnsville. The racers must dress in period
clothing, only authentic dope recipes can be applied and “one pole only” still applies. As in the
original races, it is gender base and participants must traverse to the starting line. “That can be
a feat in itself but it is all part of the fun,” says Sheehan. Once at the starting line a gong is
sounded and the racers are off!

Longboard racing is so popular that several local schools offer a class in making authentic
longboard skis. Wood from local mills with straight grain and free of knots for strength is still
used as were the original skis in the 1800s. “Many of the skis are personalized and are truly
works of art but bottom line they are built for speed,” he adds with a laugh.

Live music and food add to the festivities. On a fair-weather weekend, over a 1,000 people
come to watch and race. Sheehan adds, “Though the racers are out for a good time, the desire
to be the fastest and break records is the goal.” Nothing much has changed in over 150 years .
. . the strongest start, the straightest line, the best balance and the best dope determines the
winner. PSC (plumasskiclub.org)

Resolving to Get in Shape in 2023? Don’t Forget Your Feet