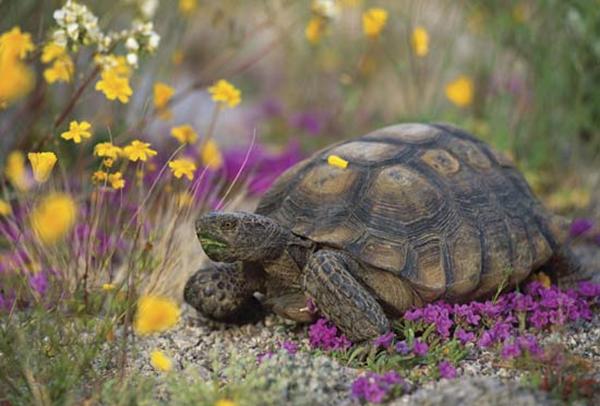 The BLM, with assistance from the Desert Tortoise Preserve Committee, established the Desert Tortoise Natural Area (DTNA) in 1976. this is a special place, a traditional home for a species now threatened with extinction. The DTNA is managed to protect this unique habitat in its natural state, free from conflict with other land uses. The total area encompasses over 25,000 acres of public land. Located in the western Mojave Desert in northeastern Kern County, the DTNA was designated an Area of Critical environmental Concern (ACEC) in 1980 through the California Desert Conservation Area Plan. It has one of the highest known densities of desert tortoises per square mile in the species' geographic range (California, Utah, Nevada, Arizona and northwest Mexico). Tortoise populations are from 100 to 200 per square mine in some parts of the DTNA.

SACRAMENTO, Calif. –The Bureau of Land Management and California Department of Fish and Wildlife have approved the first project under an innovative conservation agreement that restores wildlife habitat in the California Desert Conservation Area in Kern County.

This collaborative conservation effort aligns with the Biden-Harris administration’s America the Beautiful initiative, recognizing that federally managed public lands play an important role in conserving sensitive species and their habitats.

The JB Eastern Slope Mitigation project, approved under the Desert Renewable Energy Conservation Plan Durability Agreement between the BLM and California Department of Fish and Wildlife, will restore 158,000 acres of BLM-managed public lands as part of state-required mitigation for solar development on private lands.

Restoration efforts will improve habitat and ecosystem function. Rehabilitation of unauthorized trails is the top priority for the mitigation funding, which will allow the desert tortoise, Mojave ground squirrel, burrowing owl, the American badger and other wildlife to move more easily throughout an area, provide more food and cover from predators, reduce the collapsing of dens and burrows, and reduce excessive disturbance to individual animals and habitat. Mitigation funds will also be used to erect fencing along roads to prevent desert tortoise from crossing the roads and being injured or killed.

“The BLM values our partnership with the state of California as we continue to implement the Desert Renewable Energy Conservation Plan,” said BLM Director Tracy Stone-Manning. “The durability agreement supports federal and state clean energy and conservation priorities.”

“This collaboration between California Department of Fish and Wildlife and BLM has resulted in a significant conservation outcome,” said California Department of Fish and Wildlife Director Charlton H. Bonham. “We look forward to working closely with BLM on implementation of restoration actions on these important conserved lands.”

The BLM and California Department of Fish and Wildlife developed the durability agreement while collaborating on the Desert Renewable Energy Conservation Plan, a landscape-level renewable energy and resource conservation plan covering almost 11-million acres of BLM-managed public lands in the California desert.

The BLM manages more than 245 million acres of public land located primarily in 12 western states, including Alaska, on behalf of the American people. The BLM also administers 700 million acres of sub-surface mineral estate throughout the nation. Our mission is to sustain the health, diversity, and productivity of America’s public lands for the use and enjoyment of present and future generations.

ALABAMA HILLS ARTIST IN RESIDENCY SHOWCASE TO BE HELD JULY 1