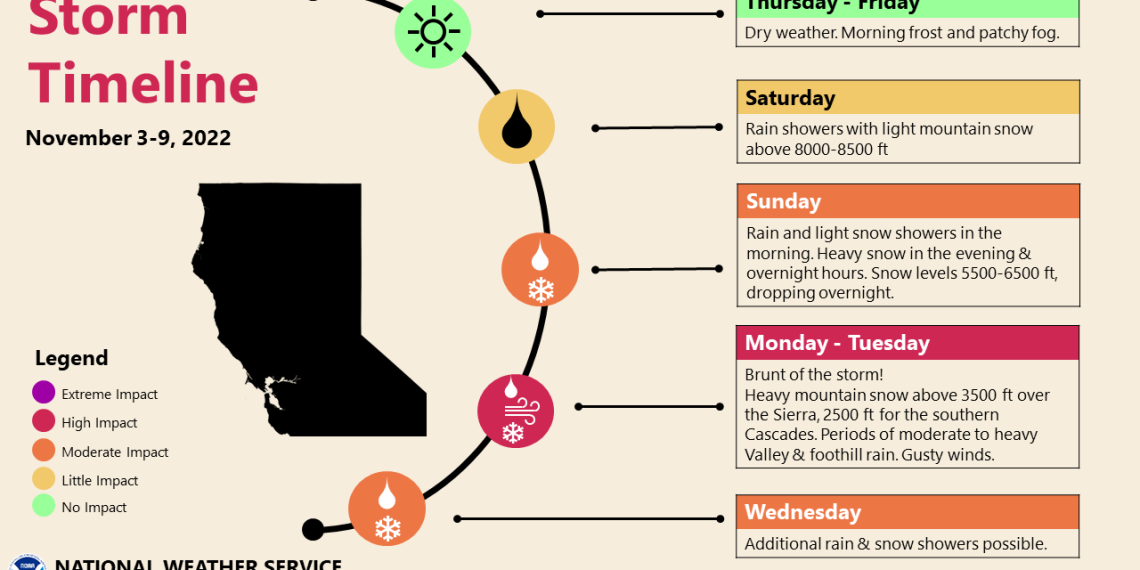 Lake Tahoe Ca, November 3, 2022 – An Early season storm has brought hope for a good ski and snow season in the Sierra. Leaving behind several inches of base snow, the Sierra today starts to evaluate and plan for the next wave that potentially will start Saturday in parts of the northern Sierra.

Today drivers are facing slick roads and tire /chain controls on all open passes and the weather forecasters are calling for a slight chance of additional snow today.. After a few days of dry and milder conditions, another chance of showers returns Saturday, with a stronger and colder storm possible for Sunday night through early next week.

The National Weather Service in Sacramento issued a winter weather advisory for this morning’s commute across the Reno-Carson-Minden areas. Bands of snow showers moved through much of the Reno-Sparks metro area overnight. While amounts were generally light (up to 1/2 inch), the concern is for untreated roads/overpasses that initially are wet then become icy through this morning’s commute due to sub-freezing temperatures after the end of the showers. Bands of lake-effect snow have also been coming off Tahoe into Douglas County and to a lesser extent off Pyramid across parts of NV-446 and northern sections of the Pyramid Highway.

For the rest of the early morning, the winds shifted more to the north or NNE over the lakes could produce some enhanced accumulations into parts of Spanish Springs and also around South Lake Tahoe. The high-resolution guidance shows activity from Pyramid Lake diminishing before 5 AM, and diminishing from Lake Tahoe by daybreak. The remainder of the day looks to be dry, with decreasing cloud cover, but temperatures will again be quite chilly, with highs only in the lower-mid 40s for lower elevations and 30s for Sierra Valleys.

After a cold start to Friday, temperatures will rebound more notably with highs returning to the 50-60 degree range for most areas with dry weather and light winds are prevailing. Attention then turns to a more active weather pattern with the first weather system dropping into northeast CA/northwest NV during the day Saturday, reaching the Tahoe basin and I-80/US-50 areas of western NV by late Saturday afternoon and evening. This system initially includes a tap of subtropical Pacific moisture, but appears to lose much of its punch as it pushes farther south Saturday night. Decent warming will precede this system with highs south of US-50 pushing well into the 60s, and snow levels look quite high with the main precip band, most likely between 8000-8500 feet. Liquid amounts are projected to be relatively modest with maybe up to 0.50″ near the Sierra crest, but otherwise 0.25″ or less for eastern CA and generally 0.10″ or less for most of western NV. Winds will also increase Saturday afternoon-evening with gusts 30-40 mph in lower elevations and up to 70 mph for Sierra ridges.

This weaker system could open up the door for a more significant and much colder storm coming by Sunday night and persisting through Tuesday. Ensemble model guidance shows a consensus for a low near the Pacific Northwest coast dropping southward into northern CA, with abundant moisture also being drawn in. This setup would suggest a more widespread and potentially intense snow event for the Sierra and even into western NV compared to this week’s system and windy conditions ahead of the main cold front Sunday night into Monday. Get ready for an early season boost to the winter snowpack and prolonged travel hazards that come with storms of this magnitude.