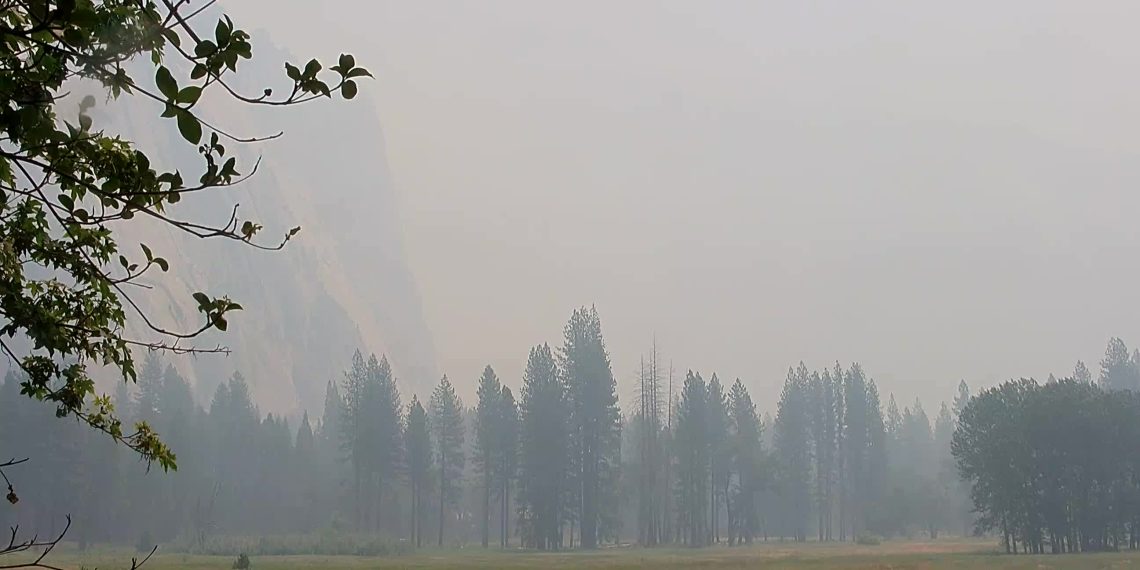 Yosemite National Park – July 11,2022 – The Washburn Fire which started last week near Yosemite National Park continues to grow and threaten the park & regions historic trees and structures. The fire had increased in size to over 2000 acres and it remains zero percent contained as of 9:15 a.m. Monday.. It has grown more to the south, according to reports, but it has also extended slightly closer to Yosemite’s famed Mariposa Grove of giant sequoias.

As of Sunday night, the fire had burned 2,340 acres (3.6 square miles), federal fire managers said. The map below shows the approximate perimeter of the burn area in black.

The fire had not yet crossed the river into the burn footprint of the 2017 South Fork Fire, where the reduced fuel would likely slow its progress.

The fire is also producing a huge amount of smoke that is impacting air quality in the park. Campers and residents near the blaze were evacuated but the rest of the sprawling park in California remained open, though heavy smoke obscured scenic vistas and created unhealthy air quality. More than 500 mature sequoias were threatened in the Mariposa Grove, but as of today there were no reports of severe damage to any named trees, including the 3,000-year-old Grizzly Giant. Some of the massive trunks were wrapped in fire-resistant foil for protection as the blaze burned out of control. And the park has turned on a sprinkler system near the trees to help prevent fire spread in the area.

Images from the Yosemite Conservancy Web Cams show just how dangerous the ar quality is getting in Yosemite Valley.

The cause of the fire is still under investigation and traffic is still closed on HWY 41 into the Wawona area of Yosemite National Park.

Instagramers have started pouring in with images of their favorite Wawona region locations, in hopes that they are spared from the fire.

And Yosemite National Park has announced a community meeting for the Washburn Fire updates at 7pm tonight. A Washburn fire information community meeting will take place on Monday, July 11, at 7 pm, at the Oakhurst Community Center (39800 Fresno Flats Rd). Follow Yosemite Fire and Aviation for updates. The meeting will also be livestreamed on facebook.com/YosemiteFire. #WashburnFire