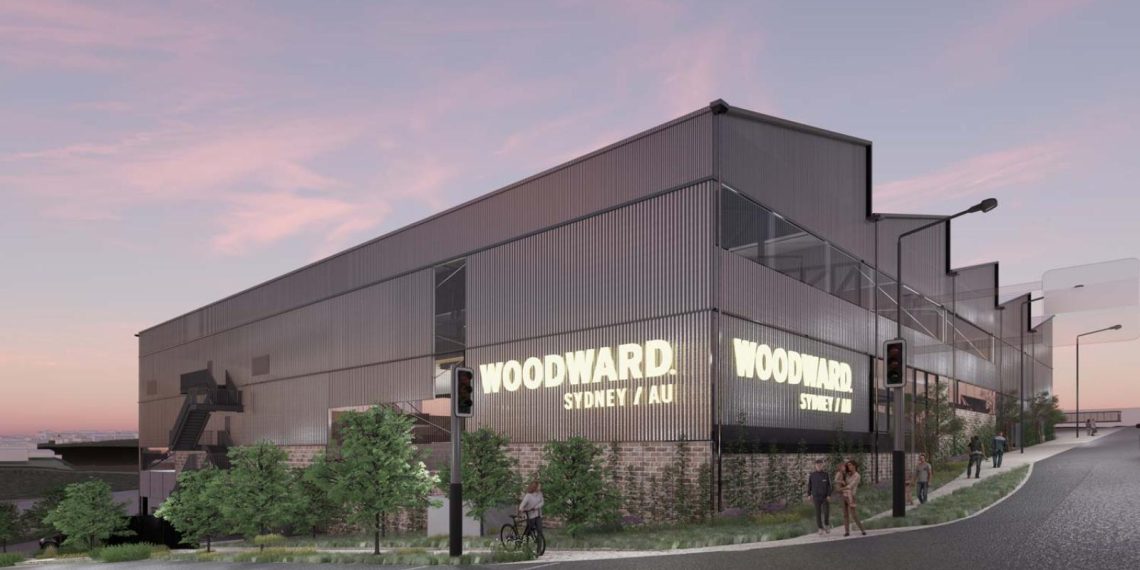 ONE OF SEVERAL MAJOR INVESTMENTS IN ACTION SPORTS

(Park City, Utah) – November 15, 2022 – Woodward, the global leader in action sports experiences, announced today it is expanding overseas, opening its first ever Urban Center in Sydney, Australia. Scheduled to open in late 2024, Woodward Sydney will be a world-class indoor action sports community facility with a state-of-the-art design that is progression-focused, catering to all ages and ability levels from beginner to Olympians. This is Woodward’s first expansion since the opening of Woodward Park City in 2019 and one of several major investments the company is making in the future of the brand and its commitment to action sports, which also includes renovating existing facilities at Woodward Pennsylvania and Woodward West; developing new facilities and experiences focused on safe progression; and emphasizing the participation and empowerment of women and girls.

Developed in partnership with the New South Wales Office of Sport, the new Woodward Sydney will be located in Castle Hill, a suburb in the region of Northwest Sydney that is about a 30-minute drive from Downtown Sydney. The facility will cover a total area of 68,000 square feet over three levels, in purpose- built premises at Castle Towers Shopping Centre – the retail and transport hub of Northwest Sydney. The facility will have a variety of zones catering to skateboarding, BMX, scooter, snowboarding, skiing, rock climbing, bouldering, and fitness training, with a café and bar overlooking all the action. Specific elements will include climbing and bouldering walls, skatepark, pump track, mini ramps, mega ramp, trampolines, and a spring floor. Construction is planned to begin in the first half of 2023.

“Growing beyond the North America market to overseas has been a goal of ours for a number of years and the expansion of Woodward Urban Centers is our next frontier,” said Woodward President Chris “Gunny” Gunnarson. “Woodward Sydney will be our most innovative concept to date – and a model for future Urban Centers. We have historically been known as the place to go if you are an aspirational professional athlete, but we want all Woodward locations to also be focused on empowering athletes of all abilities and age levels to safely progress on a clear path at their own pace using our unique blend of innovative environments, dynamic programming, and passionate staff. Woodward Sydney will epitomize that mission.”

Woodward has made other significant investments to expand and evolve its facilities and experiences in recent years including the addition of Woodward Mountain Parks at Copper, Tahoe, Killington, Eldora and Mt. Bachelor, as well as the development of Woodward Park City and the designation of Woodward Copper and Woodward Park City facilities as Official Training Centers for U.S. Ski & Snowboard athletes. In addition to expanding overseas with the new Woodward Sydney, Woodward is embarking on major renovations of its two popular U.S. camps as well.

The transformation of Woodward Pennsylvania and Woodward West will be focused on renovating existing facilities to create more and better experiences and environments that lean into progression in action sports. Work is already underway with the first phase anticipated to be completed for the Summer 2023 camp season. Improvements will focus on facilities needed for the camps’ core action sports: skateboarding, BMX, scooter, parkour, and multisport, which samples multiple action sports as well as parkour, trampoline, and tumbling so action sports athletes can find their true passion.

At Woodward Pennsylvania, three buildings totaling nearly 42,000 square feet will be renovated to include a multisport progression hub and training facility-style skatepark. New outdoor parks are planned as well including a reimagined snake run. At Woodward West the renovations are focused on one building totaling nearly 23,000 square feet that will become a multisport facility. With design led by Steve Swope, a legend in the sport of BMX Freestyle for the past four decades and Vice President of Innovative Environments at Woodward, the new facilities are planned to include learning areas with ramps, pump tracks, airbags and foam pits as well as trampolines and spring floors and upgraded facilities for parkour, climbing and bouldering. Non-sports facilities will also be upgraded over the next several years including lodging cabins and bathrooms, and food and beverage outlets as well as operations facilities like administration and maintenance.

“This will really be a dramatic transformation of our physical camp environment,” said Steve Swope, Vice President of Innovative Environments at Woodward. “Not only will the action sports facilities be best in class and promoting a culture of safety and respect for freedom of expression, but the living spaces and recreational areas will elevate the camp experience to an entirely new level over the next several years.”

Another priority for the future of the Woodward brand will be a focus on inclusion and women’s empowerment in action sports. Several Woodward destinations have made this a focus in recent years and have had success in increasing female participation across a variety of action sports rooted in a foundation of inspiration and empowerment for both coaches and athletes. Woodward Tahoe has seen a substantial increase in female participation since 2019 while Woodward Copper nearly doubled female camper numbers at their Summer Snow Camp between 2021 and 2022.

To ensure female participation is a top priority across all Woodward destinations, the brand has established a Women in Action Sports Advisory Council which will seek to enhance the status, representation and opportunities for girls and women in action sports through Woodward branded experiences and advise Woodward on how to positively increase female participation and awareness in action sports.  The new collective will include powerhouse women from across the industry such as professional snowboarders, skateboarders, and brand leaders with a shared vision for growing female participation in action sports. The Council will work toward having a direct impact on Woodward hiring practices, event planning and the development of curriculum-based programming – all aimed at women in action sports. Athlete collaborations and female-focused partnerships will be a priority for Woodward as will growing the number of women in senior leadership positions at the company.

“It’s no secret that action sports have historically been male dominated and while we’ve seen that start to shift in recent years, we have the chance with the Women in Action Sports Advisory Council to be the catalyst for the realization of safety, inclusion and empowerment for women and girls through sport inspiration and motivation,” said Phoebe Mills, VP of Camp Experiences & Programming at Woodward Global and Olympic medalist.

Woodward Mountain Parks are open for the winter and Summer Camps experiences are on-sale now. To stay up to date on all of Woodward’s plans to lead action sports into the future, visit www.worldofwoodward.com.

Ski California Puts Safety In The Hands of Skiers and Riders

Experience Winter On the Sierra PCT