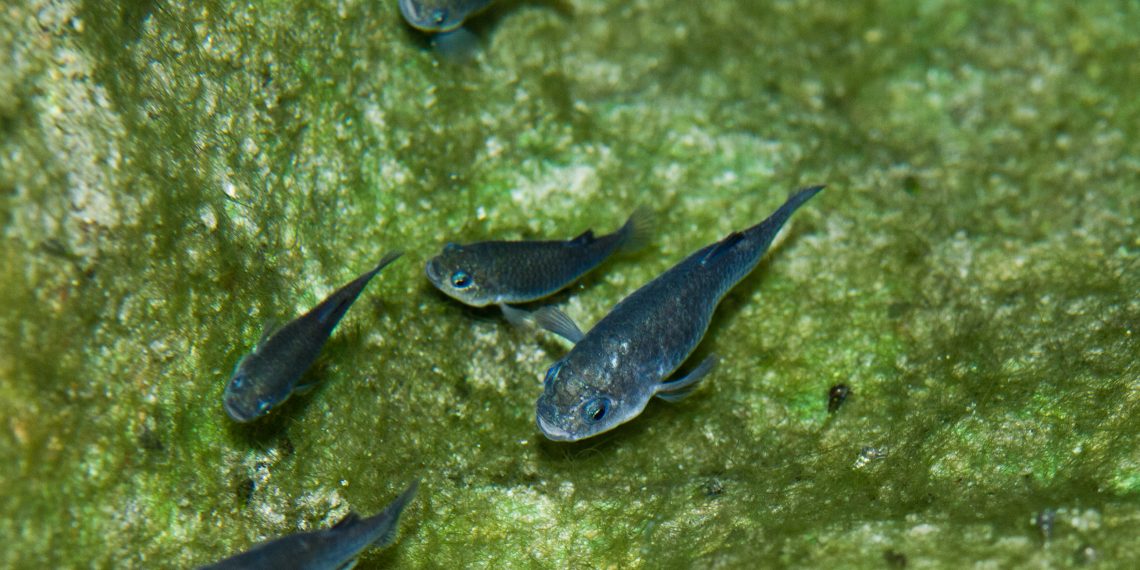 AMARGOSA VALLEY, NV – Fish biologists are excited to report increased numbers of one of the world’s rarest fishes. Scientists counted 175 Devils Hole pupfish, which is the most they’ve observed in a spring count in 22 years. This momentous count also marked the 50th anniversary of counting pupfish using SCUBA, dating back to April 6th, 1972.

Devils Hole pupfish (Cyprinodon diabolis) live in the upper 80 feet of a deep water-filled cavern and sun-lit shallow pool at the cavern’s entrance, making this the smallest range of any vertebrate species on the planet.

Population size is estimated by counting fish throughout its habitat, with standard counting protocols. Scientists SCUBA dive to count fish in the cavern, starting at depths below 100 feet. Simultaneously, other scientists count fish on the shallow shelf at the waters’ surface. The final count includes both surface and underwater fish. The official result, 175 observable pupfish, is the highest count recorded in 22 years.

Before the 1990s, the population was around 200 pupfish in the spring. However, pupfish numbers have been especially low during the last two decades, averaging only 90 fish.

A return to higher numbers of pupfish this time of year could signal important changes in the ecosystem. Kevin Wilson, Aquatic Ecologist for Death Valley National Park, manages resources of Devils Hole, and states “such shifts highlight the importance of maintaining long-term data as we work to find out what’s changed.”

The official result, 175 observable pupfish, is the highest count recorded since April 2000. On this count, Brandon Senger, Supervising Fisheries Biologist for Nevada Department of Wildlife, counted a surprising number of young fish below the surface. For biologists at Devils Hole, it’s always great to confirm spring reproduction coming out of winter. Other biologists on site noted fish appeared both in remarkable condition, and very active.

Having more pupfish in Devils Hole also affects the direction and focus of species recovery. This week’s count continues an overall springtime increase over the last 9 years from the all-time low of 35 fish. Michael Schwemm, Senior Fish Biologist for the US Fish and Wildlife Service, states “it’s exciting to see this shift, because if persistent, allows more opportunity for study and to explore new management options.” The next pupfish count occurs next fall.

Discover Camping & Travel In The Sierra With RV Share